The Faces of Gospel Music Pioneers 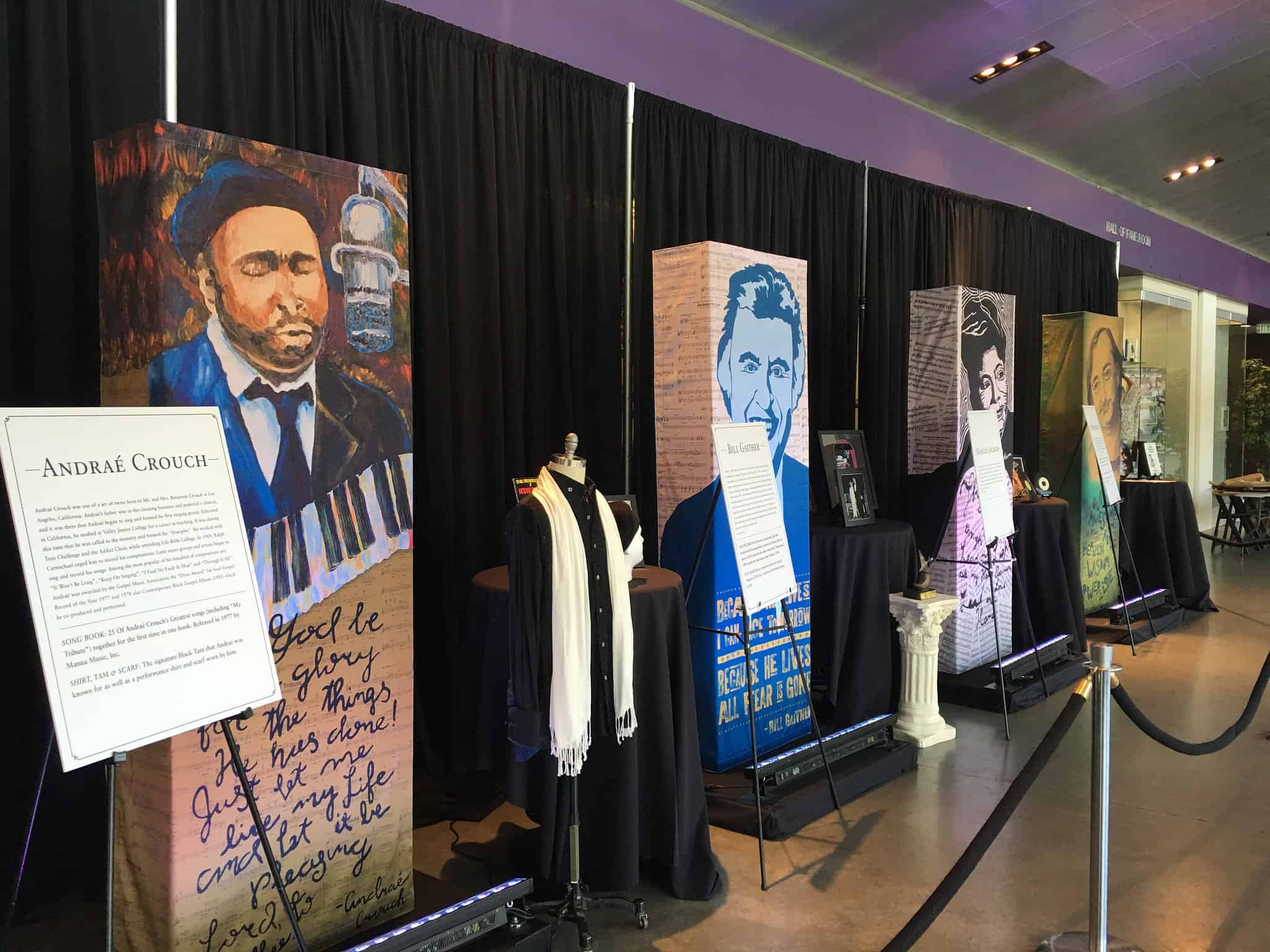 About the Portrait Exhibit

SONG: Because He Lives

William J. “Bill” Gaither, born March 28, 1936, was avid fan of gospel quartets throughout his childhood. He founded his first group, The Bill Gaither Trio, in 1956, while he was a college student. In 1962, Bill married Gloria Sickal, who became the best writing partner Bill could have found anywhere. The couple spent the first five years of their married life juggling full-time teaching jobs, writing, singing, recording and publishing until music became their full-time career in 1967. The collaborations of Bill and Gloria have resulted in more than 700 popular gospel songs. They have collectively won eight Grammy Awards and more than a dozen nominations, and they have received more than two dozen Dove Awards from The Gospel Music Association, earning the title of Gospel Music Association’s “Songwriter of the Year” eight times. After decades of unprecedented musical successes, Bill and Gloria still operate their business from Bill’s hometown of Alexandria, Indiana, and they dwell in the same home in which they raised their family. (Source: gaither.com)

Gold Records: Bill & Gloria were awarded these Gold Video Awards from the Recording Industry Association Of America (RIAA) for sales of 50,000 for their first video album release entitled “Homecoming” (1991) and their third video release entitled “Reunion” (1992).

Dove Award: Bill was awarded his very first Dove Award for “Songwriter Of The Year”, at the first ever Dove Awards ceremony
in 1969.

Andraé Crouch was one of a set of twins born to Mr. and Mrs. Benjamin Crouch in Los Angeles, California. Andraé’s father was in the cleaning business and pastored a church, and it was there that Andraé began to sing and formed his first singing group. Educated in California, he studied at Valley Junior College for a career in teaching. It was during this time that he was called to the ministry and formed the “Disciples”. He worked with Teen Challenge and the Addict Choir, while attending Life Bible College. In 1969, Ralph Carmichael urged him to record his compositions. Later many groups and artists began to sing and record his songs. Among the most popular of his hundred of compositions are: “It Won’t Be Long”, “Keep On Singing”, “I Find No Fault In Him” and “Through It All”. Andraé was awarded by the Gospel Music Association the “Dove Award” for Soul Gospel Record of the Year 1977 and 1978 also Contemporary Black Gospel Album (1985) which he co-produced and performed.

Song Book: 25 Of Andraé Crouch’s Greatest songs (including “My Tribute”) together for the first time in one book. Released in 1977 by Manna Music, Inc.

Shirt, Tam & Scarf: The signature Black Tam that Andraé was known for as well as a performance shirt and scarf worn by him.

Singer and songwriter Richard Wayne “Rich” Mullins was best known for his worship song “Awesome God” which has been embraced as a modern classic by many Christians. His music has been covered by many artists, including Caedmon’s Call, Five Iron Frenzy, Amy Grant, Carolyn Arends, Jars of Clay, Michael W. Smith, John Tesh, Chris Rice, Rebecca St. James, Hillsong United and Third Day. Rich Mullins passed away on September 19, 1997, at the age of 41, from injuries sustained in an automobile accident.

“Pictures In The Sky” Vinyl: Pictures in the Sky is the second solo album by songwriter Rich Mullins and was released in 1987 on Reunion Records. The single “Screen Door” became a concert favorite. (Source: Wikipedia)

Sweater: Worn by Mullins for an unreleased photo shoot in 1978

Sheet Music: Mullins’ handwritten lyrics to “Oh Come All Ye Faithful” and “Praise To The Lord”

Written by:
Rev. Thomas A. Dorsey

Born on October 26, 1911, in New Orleans, Louisiana, Mahalia Jackson started singing as a child at Mount Moriah Baptist Church and went on to become one of the most revered gospel figures in the U.S. Her recording of “Move On Up a Little Higher” was a major hit and she subsequently became an international figure for music lovers from a variety of backgrounds. She worked with artists like Duke Ellington and Thomas A. Dorsey and also sang at the 1963 March on Washington at the request of Dr. Martin Luther King Jr. She died on January 27, 1972. (Source: biography.com)

Exhibit made possible by a grant from the Frist Foundation.