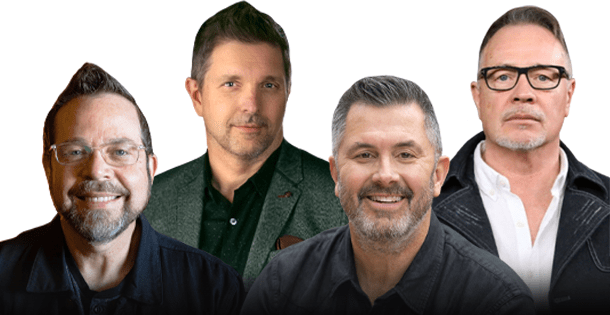 In 1987 four young men began an incredible journey together when they met in the legendary Christian music group TRUTH. It wasn’t long before audiences across the country were beginning to take notice of Mark, Marty, Kirk and Andy – their harmonies and solo voices were unique to that era of Christian music, not seen since the heyday of the Imperials.

Benson Records released 4HIM’s debut album, and the lead single “Where There is Faith” …went to #1 on Christian radio that summer. They headed out on their first tour doing nearly 250 concerts that first year on the road.

The band won New Artist of the Year at the 1991 Dove Awards and by then 4HIM had become a fixture on radio stations across the country. With the release of “The Basics of Life” in 1993 the album would garner multiple #1 songs and Dove nominations, culminating in the first of their 3 consecutive Group of the Year Dove Award wins.

4HIM has performed more than 4000 concerts together in every major city in the US and all 50 states, winning 8 Dove Awards, a Grammy nomination and would go on to sell more than 7 million albums. Although radio success was a highlight for 4HIM, their greatest joy was touring and presenting the gospel through their music to audiences around the world!

The Gospel Music Association is proud to acknowledge  4HIM for their innovative harmonies and dedication to spread the Gospel through Music.